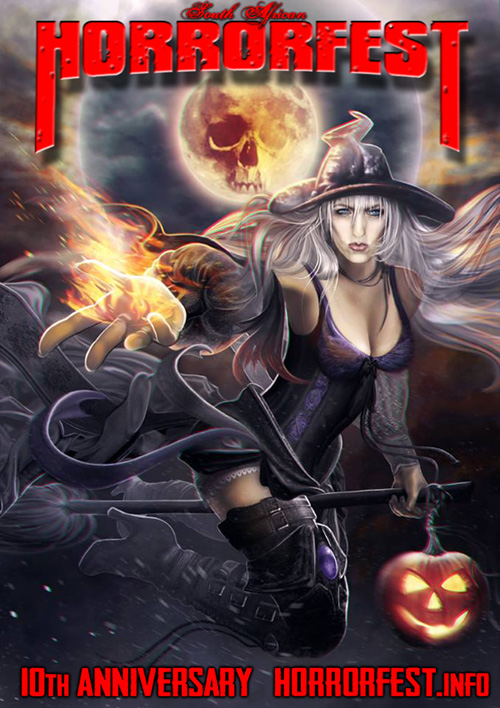 2014 SA HORRORFEST MOVIE SELECTIONS :
(
(while locked and correct at time of confirmation, titles and times may be subject to change)

All on-line ticket links at Quicket

FREE opening screening of the legendary original, celebrating 40 years of freaking out audiences.
First come first served, get tickets at This Link 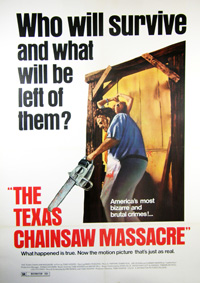 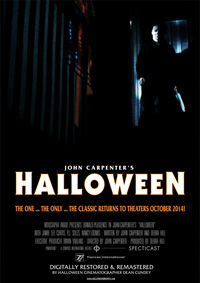 A variety of cool and exciting stalls will be set up outside the Labia Theatre, co-inciding with the
Cabinet Of Dr. Caligari live soundtrack performance night on Halloween.
Expect clothing, accessories, special T-shirts, books, DVDs CDs, food, jewelry, HorrorFest merch & more, from

The 1st chapter of strange, scary, weird, amazing, bizarre and often funny short films from around the world.

You can be sure that each of the 4 short film collections will deliver a great viewing experience you won't find on any other SA cinema screen.
BOOK NOW

This legendary 1920 silent film will be screened with a new soundtrack performed live by THE MAKABRA ENSEMBLE
on Halloween night (Fri 31 Oct, 8:30pm) - incl. Halloween dress-up competition & night market outside the cinema.
Booking Now Open For This Single Show 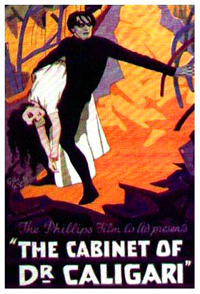 For the first time the HorrorFest introduces a chapter for the younger horror fans out there.
Halloween dress-up encouraged.
Book Now 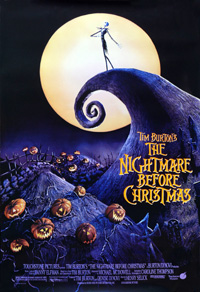 A married couple decide to spend a weekend in a remote cabin, but the romantic journey will take a turn for the worst, when a sneaking suspicion become pure madness. 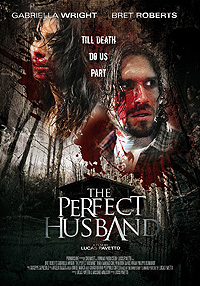 Evil Never Dies - It Waits
Three cute tourists in Thailand fall under the spell of a murdered child entity bent on vengeance.
(Shot on location in Thailand)
Book Now 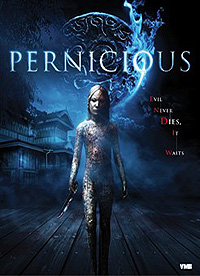 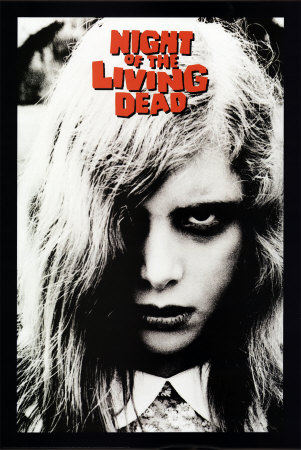 Due to unforseen circumstances, ANOTHER WORLD will not be screening (stay tuned for re-scheduled time)
BUT, the good news is, it will be substituted by the landmark zombie movie NIGHT OF THE LIVING DEAD! - George A. Romero's 1968 classic.
Arrive dressed like a zombie and get an extra ticket free!
Book Now 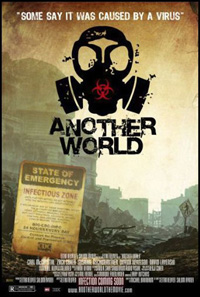 The cult classic musical film the Rocky Horror Picture Show will hit the 10th South African HORRORFEST film festival & Halloween event on Saturday night 1 November 2014, with full audience participation.
The rousing party atmosphere of this gem will light up the Labia Theatre again this Halloween weekend.  The audience is encouraged to
arrive dressed as any of the Rocky Horror characters, or anything wild, exotic & crazy, and bring the various accessories needed to interact
with the scenes on screen (from rice and newspapers, to water pistols and toast).  For those who don't have time to accumulate these,
The Lovecraft Experiment will have a stall on hand where you can buy kits with everything you may need.
The movie will have on-screen prompts for those new to the interactive Rocky Horror Picture Show experience.
Book Now 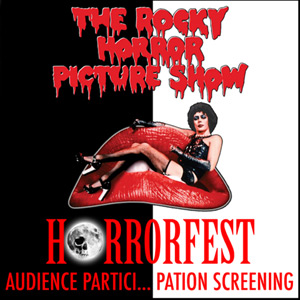 A naive university student, Evangeline, is brutalized by a gang of thrill seeking killers. Left to die in the forest, she is 'saved' by an ancient demon spirit.
The spirit empowers Evangeline with a blood-lust for vengeance. Evangeline must make a choice, is she willing to sacrifice her own soul...
Direcetd by Karen Lam.
Part of the HorrorFest's 'Women In Horror' day (Sun 2 Nov)
BOOK NOW 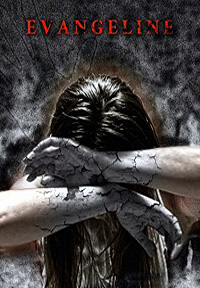 (Produced by Neil Marshall - The Descent, Doomsday, Black Sails), in this ghostly tale (directed by his wife and collaborator Axelle Carolyn) a widowed Audrey retreats to an isolated Welsh cabin after a failed suicide attempt, to recuperate. Still haunted by the tragic death of her husband and struggling with her psychosis, she begins to realise there my be another entity in the home.
Part of the HorrorFest's 'Women In Horror' day (Sun 2 Nov)
Book Now 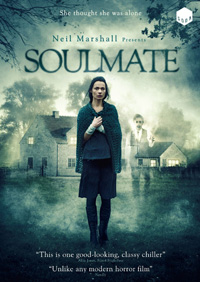 The 2nd chapter of wild, spooky, nail-biting, fantastic and often hilarious short films from around the world.

incl. some female movie-makers as part of Women In Horror day)

When a couple's car crashes into a lake, the woman is possessed by the spirit of a witch murdered by villagers in the 18th century.  (1966)
Starring Barbara Steele, John Karlson, Ian Ogilvy
Directed by Paul Reeves
BOOK NOW

A couple escapes the busy city life by moving into an old farmhouse near the Scotland border.  All is great on their first night,
until they start to realize they're not alone, and someone or something is intent on making them know they're not welcome there.
From Simeon Halligan, director of Splintered (screened at 2012 HorrorFest)
Starring Pollyanna McIntosh, Lee Williams, Joanne Mitchell
BOOK NOW

Mysterious - Irresistble - Deadly
In NYMPH two young American women on a Mediterranean vacation uncover the watery lair of a killer mermaid hidden beneath an abandoned military fortress. What was once a carefree adventure becomes a deadly fight for survival.
From the director that brought us the Serbian ZONE OF THE DEAD (screened at the HorrorFest in 2010).
Features Christina Klebe (Halloween remake) and the legendary Franco Nero (Django).
BOOK NOW 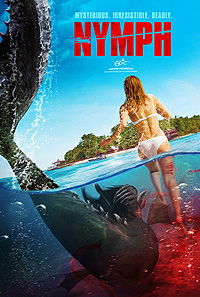 A far-out '70s flavoured Spanish movie has two gangsters on a drug deal entering a hair salon where unexplained phenomena have things go
beyond haywire, jumping through history.
Weird and hilarious.
BOOK NOW

The 3rd chapter of exciting, mad, innovative, haunting and often tongue in cheek short films from around the world. Full line-up will be announced soon, but you can be sure that each of the 4 short film collections will deliver a great viewing experience you won't find on any other SA cinema screen.

YELLOW FEVER:
THE RISE AND FALL OF THE GIALLO
TUES 4 NOV, 8:30pm

A blend of history, found footage, mockumentary and narrative, this Spanish film centers on a film crew making a documentary about Frederich Raynard, a Nazi war criminal and occult expert never got caught or turned up dead after the war (believed to have possibly ended his days in a town in northern Spain). With Raynard's diary with them, what starts as an easy job soon becomes a dark adventure that will change their lives forever.
Starring Juan Martin Gravina, Manuel Vidal, Jose Luis Chavarria
Directed by Maria Valle & Manuel Vidal
BOOK NOW

One of Francis Ford Coppola's first films made over 50 years ago in 1963 (a decade before his Oscar winning Godfather), for producer Roger Corman.  Mood-laden, black & white and reflecting his early talent with a very low budget, the movie is centered around the dysfunctional Haloran family, a spooky Irish castle, a drowning, and a man with an axe…
Starring William Campbell, Luana Anders, Bart Patton
Directed by Francis Ford Coppola
BOOK NOW

This mind-blowing documentary goes behind the scenes of the infamous 1996 remake of The Island of Dr. Moreau,
South African-born writer-director Richard Stanley's first big studio movie (and labour of love).  But it was destroyed by a clash of vision,
vain stars, studio interference, bad creative decisions, lack of interest and really bad weather, plaguing the disastrous production almost from the start.
(We had the privilege to host Richard at our Celludroid film festival a few years back, and convinced him to do a live commentary to the
screening of Dr. Moreau, from which he was removed and replaced by John Frankenheimer).
BOOK NOW 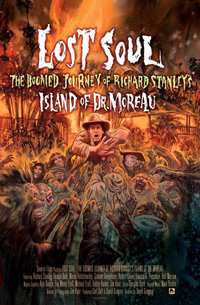 When a father and son are forced to squat in an empty London council estate scheduled for demolition, 14 year old Tommy starts to hear strange noises coming from the boarded-up flat next door...
BOOK NOW

Vampire Irina is reborn as a "vampiric" plague, a force of nature whose destiny is to lay waste to a fever dream vision of the Wild West.
Fangoria Magazine editor Chris Alexander's sequel to his Blood For Irina.
Starring South African born Shauna Henry and Nivek Ogre (of Skinny Puppy)
BOOK NOW

Cape Town born writer-director Matthew A. Brown's stylish neon-noir revenge chiller with a twist (shot in the USA)
Features music by Cape Town's one and only LARK.
BOOK NOW 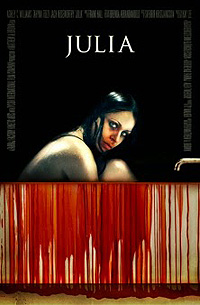 In this Hitchcock flavoured British movie a social gathering is rocked to its core when Jack accuses his best friend's wife of infidelity. But as the allegations start flying, it soon emerges that far more sinister intentions may be at play.
Starring Andrew Fitch, Isla Ure, Nigel Thomas
Directed by Christopher Presswell
BOOK NOW

The 4th and final part of the super-cool short film collection submitted to the HorrorFest from all over the globe, delivering another barrage of quick cinema punches to entertain, enthrall and leave your head spinning (incl. several South African productions).

All on-line ticket links at Quicket

As always, the 2014 HorrorFest poster features event co-organizer Sonja (this time in a witch theme),
and was designed by Simone' Hendricks. 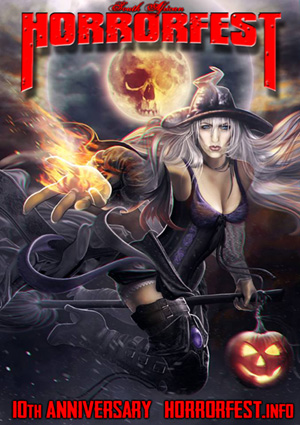 Click Here for the poster design history of the HorrorFest's first 10 years.

SAE was set to host a FREE master class on producing a Horror movie,
but will be postponed until a later date - stay tuned for updates. 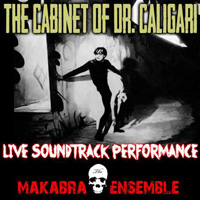 The Makabra Ensemble live soundtrack performance will be for the legendary
CABINET OF DR. CALIGARI.
Will include special guest Ronnie Belcher (Terminatryx / Gramlich / Flaming Devilles)
Booking Now Open For This Single Show 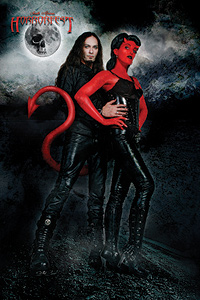 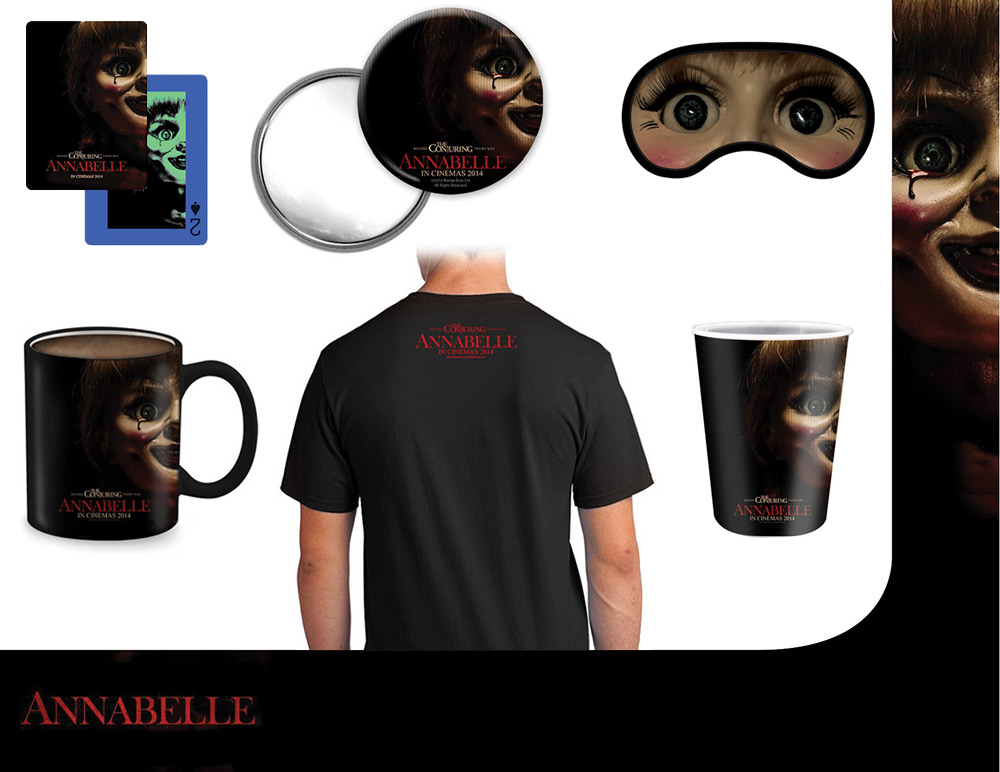 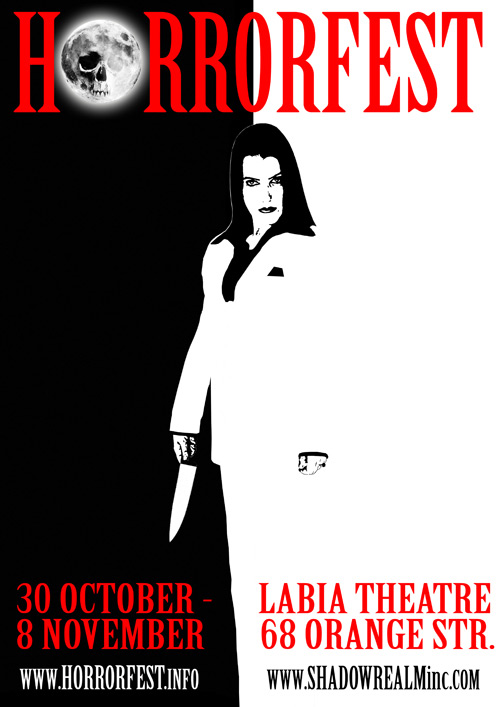 CLICK HERE for the 2013 festival
or the FESTIVAL HISTORY 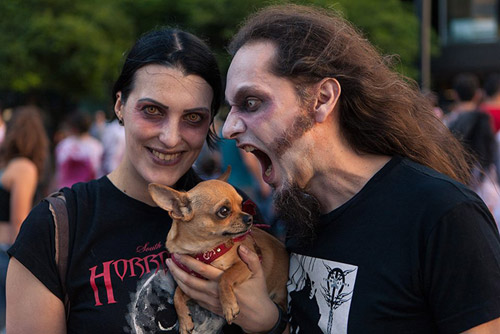 HorrorFest organizers Sonja & Paul at the 2013 Zombie Walk, with their boy Zoltan

Related film festivals you may enjoy: 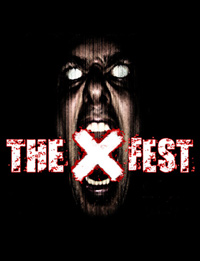 Get in the mood for Halloween and watch the short film "Marked", made by the HorrorFest organizers.
(all festival info further down)


Here is the wild new TERMINATRYX music video for their song "Virus"!
(Terminatryx is one of the music projecs of the S.A. HORRORFEST organizers -"Virus" was also expanded into
the short film "Marked"

Browse the scrolling gallery below for some of movies screened at past S.A. HORRORFEST events.
Buy them from Amazon by clicking on the movie of your choice.


Or click below to pick from 44,000 DVD and Blu-ray ttiles at Kalahari.net:


Search Amazon below for the Horror movies of your choice 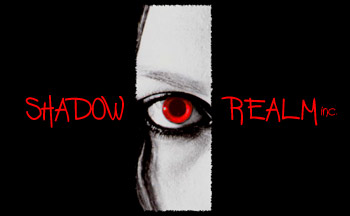